The State Cabinet on Wednesday took a series of crucial decisions that could put the growth trajectory of the State in a different orbit, create more employment opportunities for locals and tackle pollution through promotion of e-vehicles, all through government incentives to various sectors.

It also decided to take the menace of coronavirus head-on by scaling up testing for the virus to 40,000 tests per day from Thursday, double of what is being done presently. Chief Minister K Chandrashekhar Rao also announced an additional Rs 100 crore for measures to be taken to check the spread of the virus, including readying 10,000 beds with oxygen facilities across the State. He also warned private hospitals of stringent action if they failed to follow government directions on treatment and charges.

In a marathon meeting chaired by the Chandrashekhar Rao at Pragathi Bhavan here, the Cabinet approved a new industrial policy under which a major chunk of employment would be given to locals in industries being set up in Telangana State.. The Cabinet was of the view that locals should be given more opportunities in industries being set up in the State, and to encourage this, the Cabinet also decided to extend incentives to industries which provide more job opportunities to locals.

After Telangana State was formed, the government brought in the path-breaking TS-iPASS Act that facilitates easy permissions to set up industrial units in the State. This had resulted in lot of industries coming to the State. The Chief Minister had subsequently instructed the Industries department to come up with a policy that would create more employment potential for the locals in such industries. 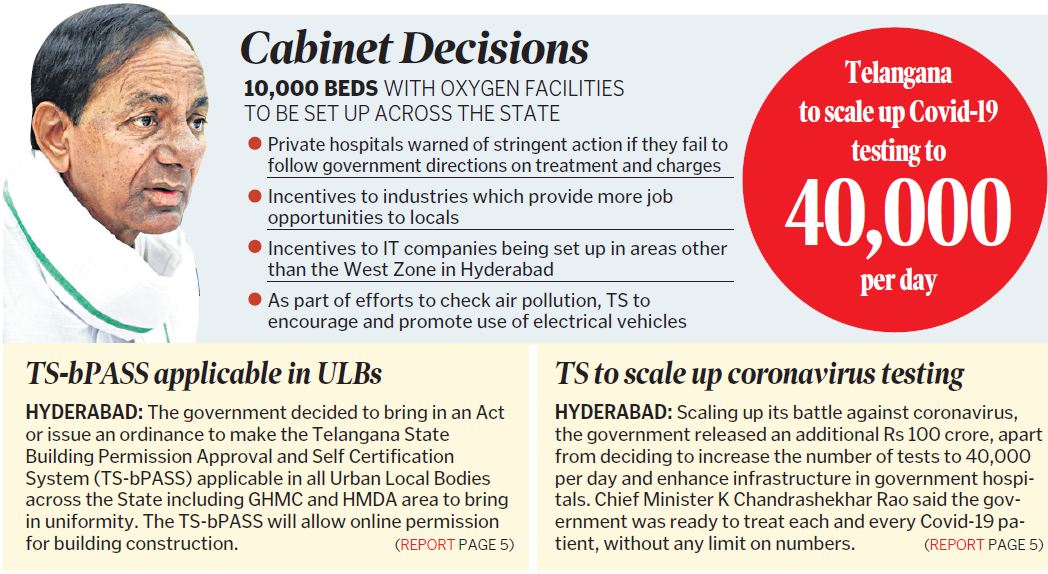 Consequently, the Industries department, under the leadership of Industries Minister K T Rama Rao, got into the act and came up with a draft policy, which was discussed at length at the Cabinet meeting before it was given the stamp of approval.

In another move to decongest the IT sector from a particular area or zone, the State Cabinet, stating that the IT industry should be spread all over the city, approved a Grid policy (Growth in dispersion). Here again, the Cabinet decided to extend incentives to IT companies being set up in areas other than the West Zone in Hyderabad.

Another major decision that would go a long way in checking air pollution in the State was to encourage and promote use of electrical vehicles. The Cabinet decided to encourage production of e-vehicles in the State by giving them incentives through the Telangana State Electric Vehicle and Energy Storage Solution Policy.

The State Cabinet also gave its approval for the construction of the new state-of-the-art integrated Secretariat complex as also the design for the structure.